On July 1, 2021, SA Water’s brand-new metro fleet of trucks and utility vehicles, purpose designed and built for the challenges of its crews, was delivered. This included 63 Hidrive bodies, consisting of 49 Water Maintenance vehicles and 14 Sewer bodies fitted to MY2021 Isuzu D-Max single-cab utilities.

Updating a large fleet can be daunting especially when you can’t afford to have vehicles off the road while waiting for replacements. When SA Water and Service Stream were faced with updating their metropolitan fleet, which operates 24/7 on-call in all conditions, it had to be achieved in a strict timeframe to ensure ongoing delivery of SA Water’s services.

A significant challenge to achieve this was sourcing the core vehicles. Many dealerships in Australia have faced supply shortages of new vehicles during the pandemic. North East Isuzu in Shepparton, Victoria, made it happen despite global stock issues, sourcing 63 of the latest Isuzu D-Max single cabs, with an all-new D-Max boasting the latest tech, safety and features launched in late 2020.

“When we went back regarding the bid for the SA Water contract, it was a material change in the vehicle selection compared to what the practices have been in the last 20 years,” said Michael Bourke, Service Stream’s PPEV Transition Lead for the SA Water Adelaide Services Delivery Project.

“Traditionally, they’ve used excavators and big heavy equipment. The Service Stream strategy was to use modern technology – Hydrovac units, blasting units – which is a material change. The client was obviously nervous at the start about the change, but they’re moving with the times in how you can do the job.”

North East Isuzu’s supply of Isuzu D-Max allowed Hidrive to turn the taps on for the project, designing two types of purpose-built service bodies – provided they could be made in time.

Several factors enabled Hidrive to reach the goal for SA Water. Key was the configurability and versatility of the Hidrive proprietary modular design, as was a dedicated support team.

“What Hidrive have done for Service Stream is deliver for our Day One deadline – there aren’t many body manufacturers that could deliver 63 vehicles in a timely schedule,” said Bourke. “They’re very good at communicating and keeping us updated on their progress, and they never missed a delivery date through the transition.”

Also critical in keeping the project flowing was Hidrive’s extensive experience, which included service bodies for Sydney Water, which attends to more than 5 million customers. Two distinct types of Hidrive service bodies were created specifically for the tasks SA Water crews deal with on a daily basis, and like all Hidrive service bodies, are certified to the ISO9001 quality standard.

The first is the Sewer service body, which is designed to provide civil maintenance of the sewer network to the inspection point of the houses.

“When someone has a blockage, a sewer blockage, and it’s not near the main in the street, the Hidrive body has a sewer blaster on it and it’s there to free the network,” Bourke explains.

The other specially-designed Hidrive body designed for SA Water is a Water Maintenance type. It’s designed to enable crews to carry out small water repairs, minor blockages and meter replacements to households and consumers.

“This fleet is absolutely state-of-the-art; no other water utility will have all of this equipment and tools on their vehicles,” said SA Water’s South East Water Supervisor, Yahia Jammoul.

SA Water and Service Stream worked closely with Hidrive on designing and engineering bodies that were bespoke for the heavy-duty jobs they needed to carry out.

“The inside of the Hidrive box, the way it’s actually set up, it gives us the flexibility of having long and short tools, for example,” says Jammoul.

“The drawer that comes out, the toolbox on either side, and the freedom of actually opening everything up for a 360-degree view of the Hidrive unit are key to our crews being effective, efficient and comfortable.”

Hidrive was integral to the process, delivering what Jammoul and Bourke required for the fleet, and delivering on schedule.

“When I came on board in January [2020], Hidrive had a concept design,” Bourke says. “When we got the operational team together, we made some material changes to the bodies, and we worked very closely with Doug [Elford] and the team at Hidrive to make those changes.

“With the quality of the CAD drawings and the design, we finalised those by February; production started in March, and we had all the bodies delivered here early June. It was very, very easy and Hidrive was completely flexible, ensuring we were getting exactly what we needed.”

As well as being fit for purpose, safety and durability were integral to the changes, as demanded by SA Water’s strict charter for its 1500 staff and its customers.

“The safety features and the fit out for the Water Maintenance ute, we carefully worked through that to fit items such as LED lights in the cabins, so when the doors open up we’ve got LED lighting. The crews are working all times of day and are on-call at night, so it’s very important to have lights for them to work quickly and easily in safety,” Bourke explains.

“We’ve set up the drawers and internal cabinets so that we could fit both tooling and inventory, so we worked closely with Hidrive in regard to what the application was going to be and what tools and inventory were needed to do our job,” he adds.

“We also changed the door design on the driver’s side, so when the technician was working on the street the door folds,” he says. “That means it doesn’t overhang the road so much, but also keeping in mind that our crews work in winter and all sorts of weather, so we need the protection from the rain when they’re operating out of the ute.

SA Water is now equipped with a service fleet that’s more capable, cost-effective and tailored to the needs of its crews and customers.

“There was a bit of twigging to try and fit everything together, plus give the crews plenty of room to put all their equipment in there, all their hand tools, all their spare clothing,” said Jammoul. “We fit it all in; we’ve had great feedback from the technicians and obviously Hidrive have been fantastic.” 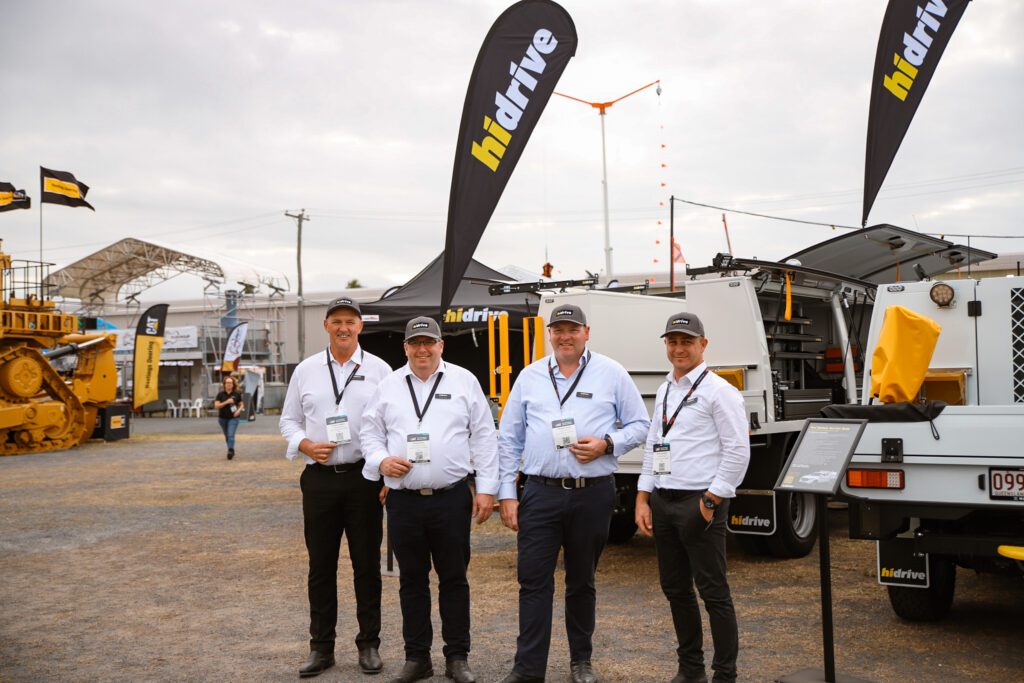 Hidrive at QME in Mackay!